When I was in the planning stages of my trip to Egypt, a Nile cruise wasn’t on my radar. I was planning a DIY 2 Week Egypt Vacation on a budget and, in my head, a cruise wasn’t going to fit into that budget. Yet as I researched hotels in Aswan and Luxor, the best ways to get between them, and what to see and do, I came across a number of threads, comments, and articles saying that taking a Nile River cruise was the best way. So, I decided it couldn’t hurt to look into it. After all, Egypt was one of my dream destinations so maybe a Nile River cruise would be worth the splurge.

psst check out my 1 minute highlights of Egypt video below!

Unsurprisingly, there are a million and one choices when it comes to Egyptian Nile cruises between Luxor and Aswan. Some were basic, offering nights sleeping on the deck of local feluccas under the stars. Others were five stars, world-class luxury. And, of course, everything in-between. 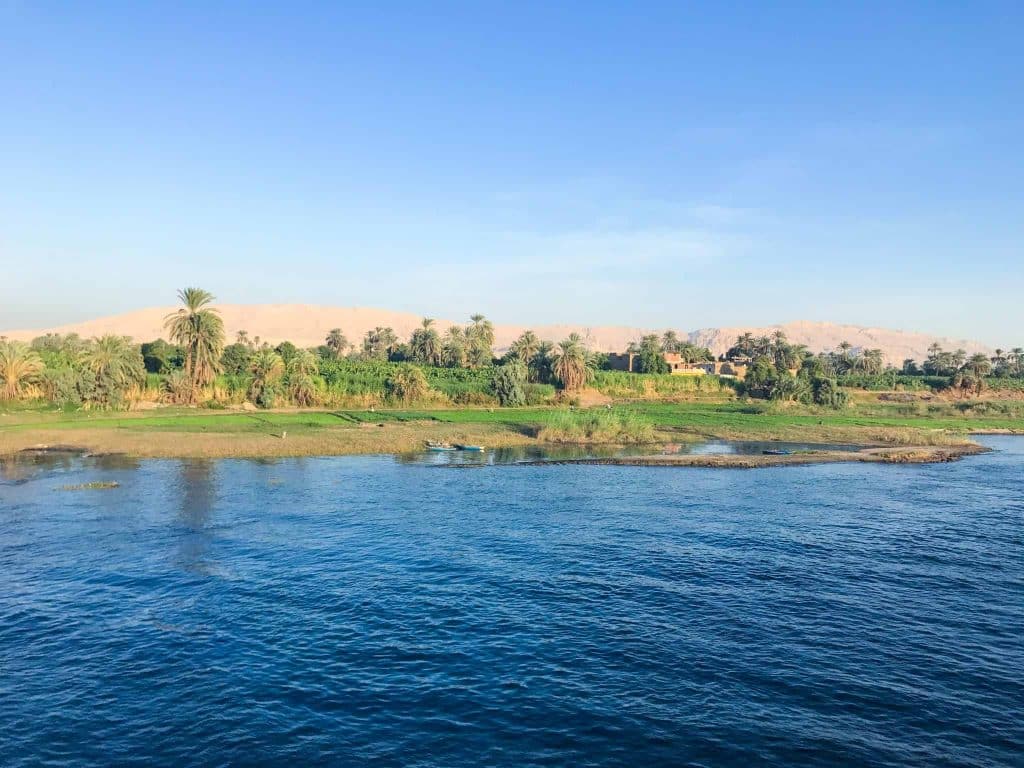 I don’t even want to tell you how long I spend looking at and comparing the different Nile river cruises. I reached out to several companies for additional details and inquiring about add-ons. I broke down the different routes comparing the Aswan to Luxor cruises vs the Luxor to Aswan Cruises, then the 3-night vs 4-night cruises. Then finally, when that was all done, I compared the cruises to my original plan of a DIY method to see what offered the best deal, not just in terms of cost, but in terms of what we would get to experience. In the end, I realized that those comments and articles I read in the early days were right. A Nile cruise really is the best way to explore ancient Egypt. Here’s why.

A Nile Cruise Really is the Best ‘Bang for your Buck’ 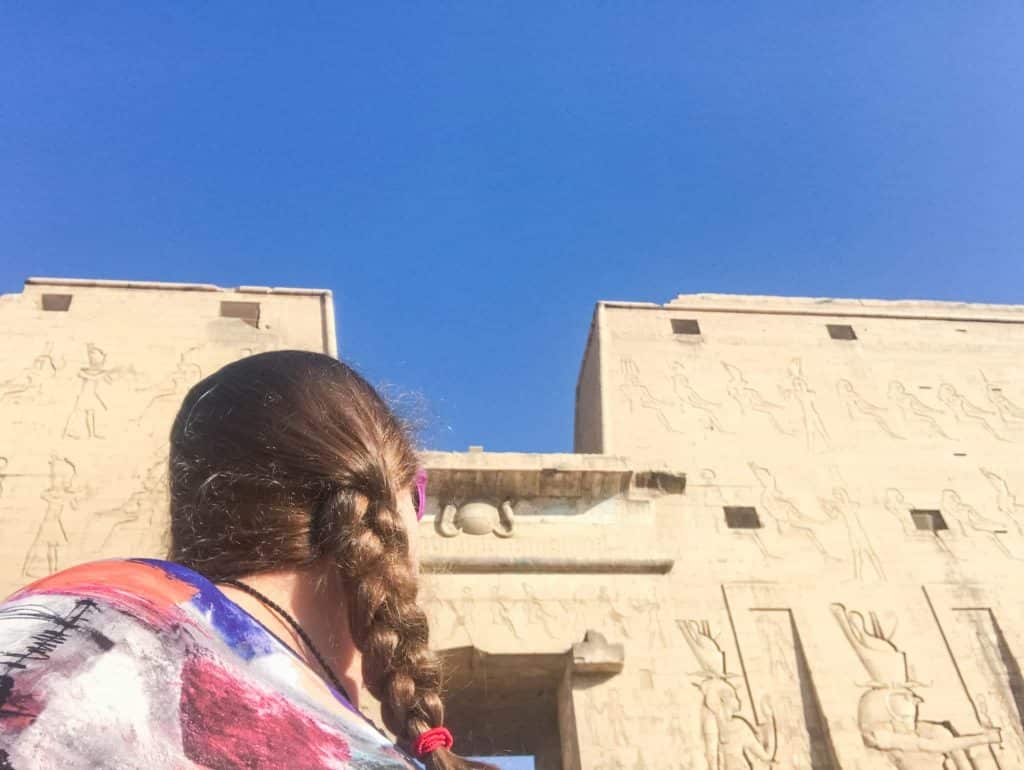 As I mentioned above there were a million Nile cruises to choose from.The one we went on wasn’t the fanciest Nile cruise on the market, but it was definitely one of the nicer ones and much more upscale than a basic felucca (I skipped this option because of the lack of onboard toilets- that was just asking for trouble). We did a 5 day, 4-night cruise from Luxor to Aswan on a nice ship with all meals included (except for drinks, which was a bit weird but they were super cheap). The main reason we picked this tour was good reviews, the timing worked, and our package included a private guide. One professional Egyptologist just for my brother and I. Which sounded a bit crazy but also awesome because we are both ancient Egypt nerds.

Sounds pretty swank, doesn’t it? Especially for someone trying to see Egypt on a budget. But guess what? We paid $395CAD*, taxes included (~300USD), each for the whole package. That’s $79CAD (~60USD) per day for accommodation, transportation, 3 meals, tour entry, and a private guided tour of 2-4 sites each day. If that’s not a deal, then I don’t know what is. Especially because, in the end, our Nile river cruise actually ended up being cheaper than doing it all on our own. Not to mention it was a much more enjoyable experience.

*We did end up adding on a couple of extra sites, such as Abu Simbel, the light show at Karnak Temple, and the Nubian Village which bumped the prices up a couple hundred each. Totally worth it though!

A Nile Cruise is So Much Easier 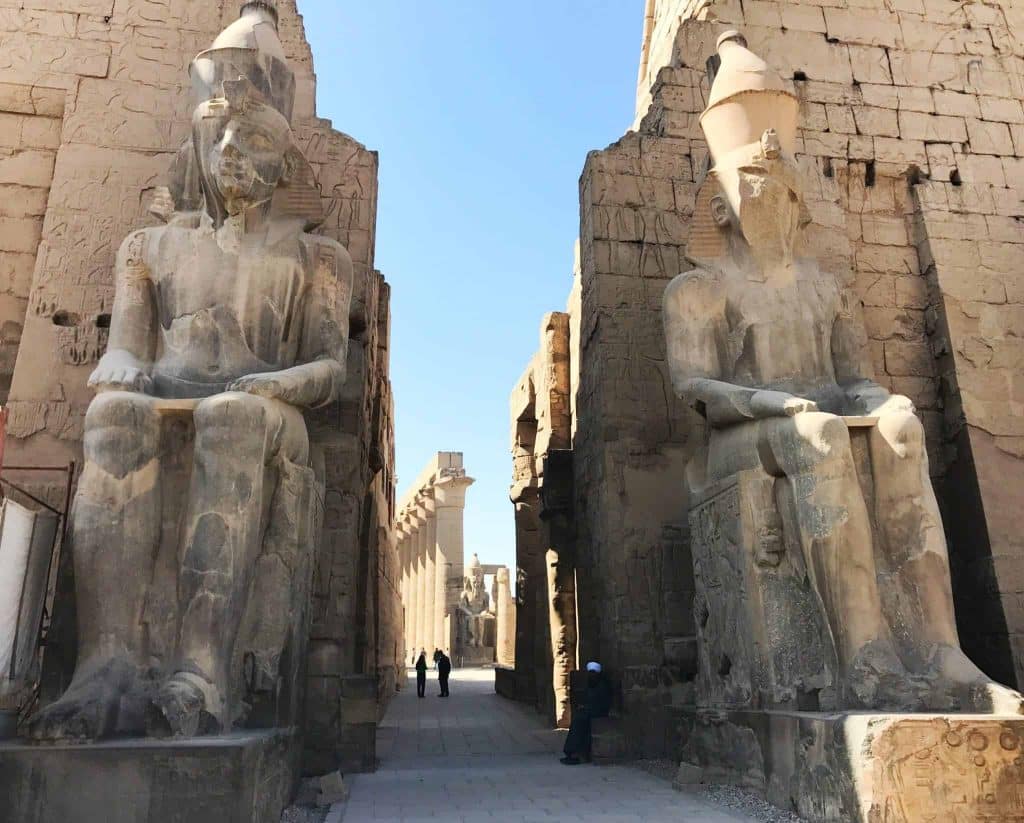 Travelling through Egypt on your own isn’t exactly hard, but it’s not easy either. After spending so much time travelling solo through Southeast Asia I had an idea of what to expect and how to engage. Silly things like don’t just get into a taxi- make sure the meter is on or agree to a price ahead of time. Don’t really look at things unless you are actually interested in buying, etc. But, even with that experience behind me I had a couple tricky moments while travelling through Egypt and we were still constantly called after by shop vendors and touts (not troublesome, just annoying after the first 25 times).

Taking the Nile cruise took away a lot of those tricky situations. I didn’t have to worry about getting ripped off by taxis. I wasn’t left wondering whether the self-proclaimed guides who offered their services were legit or not. I didn’t have to stress making sure I got on the right bus or got off at the right stop. And, since I was travelling with a guide for the sites and attractions, we didn’t get harassed to shop nearly as much. I won’t go so far as to say it was a relief, because I do love having authentic experiences with locals and being subject to the everyday hustle and bustle, and we felt safe in Egypt, but I will admit that it was a nice break that did allow me to enjoy the experience more. Which I am very grateful for because our five days between Luxor and Aswan on our Egyptian Nile cruise were absolutely the highlight of our two weeks in Egypt. I’m sure some of that has to do with the fact that I was just able to relax, enjoy, and take it all in without the added stress of figuring out transportation, tickets, and guides on my own.

A Nile Cruise Allows You to See and Do More 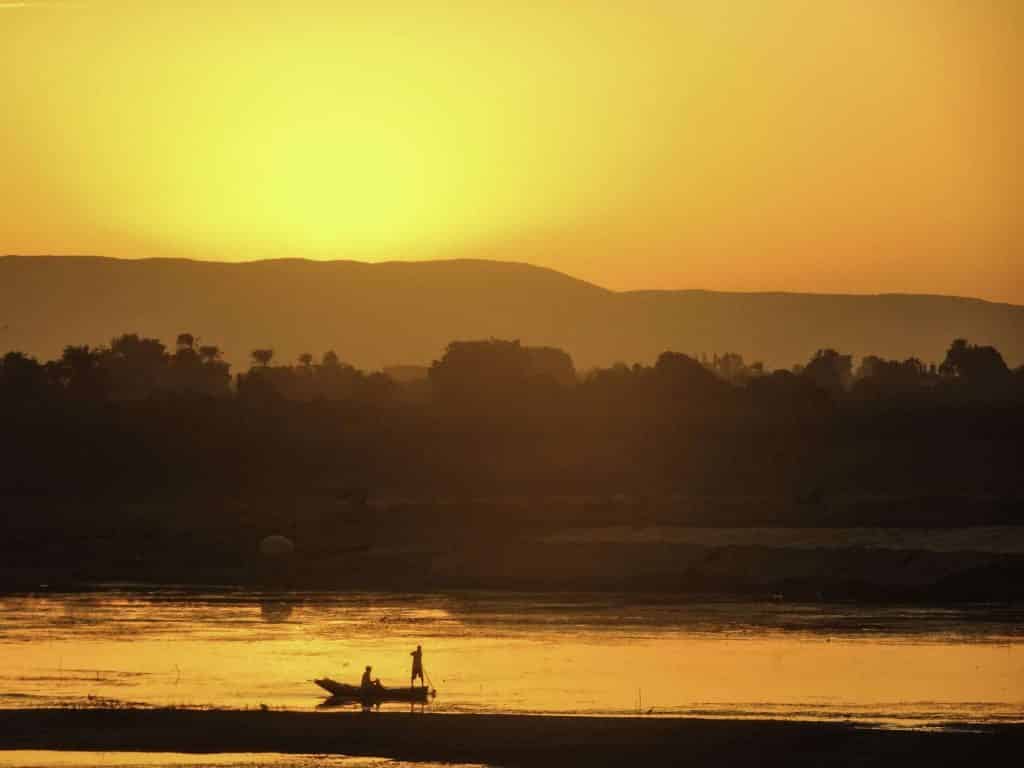 Even if the Nile cruise we chose ended up being more expensive than our original DIY plans, we would have done it anyway. Because choosing a Nile cruise to travel between Luxor and Aswan offers travellers the opportunity to see and do so much more.

The most obvious aspect of this is the scenic cruising. Instead of cramming ourselves onto a bus to travel down boring old highways or bumpy roads, we got to sit on the sundeck and watch the wildlife, jungle, and desert hills go by. I spotted local fishermen at sunset, farmers with their cattle herds, and tons of beautiful scenery. So much of the cruising was peaceful and relaxing as we passed by lush green fields. It was a huge contrast to the dusty, noisy cities and something I’m thrilled that I got to see.

But while the cruising was definitely a plus, by choosing a Nile cruise over travelling by land, we also were able to add on a couple of extra stops that we probably wouldn’t have been able to do if we had planned this section of the trip on our own. Most people travelling by land focus on the attractions in Luxor then head straight to Aswan. On the Nile cruise, we got to add Edfu and Kom Ombo to out itinerary which allowed us to see two more temples: Edfu Temple and Kom Ombo Temple. Edfu Temple, which is dedicated to the God Horus, ended up being one of my favourite temples in Egypt. While Kom Ombo temple, which is dedicated to both Sobek and Horus, included a visit to the unique and strangely fascinating crocodile museum which has crocodile mummies among other things.

A Nile Cruise Isn’t as Touristic as You Think 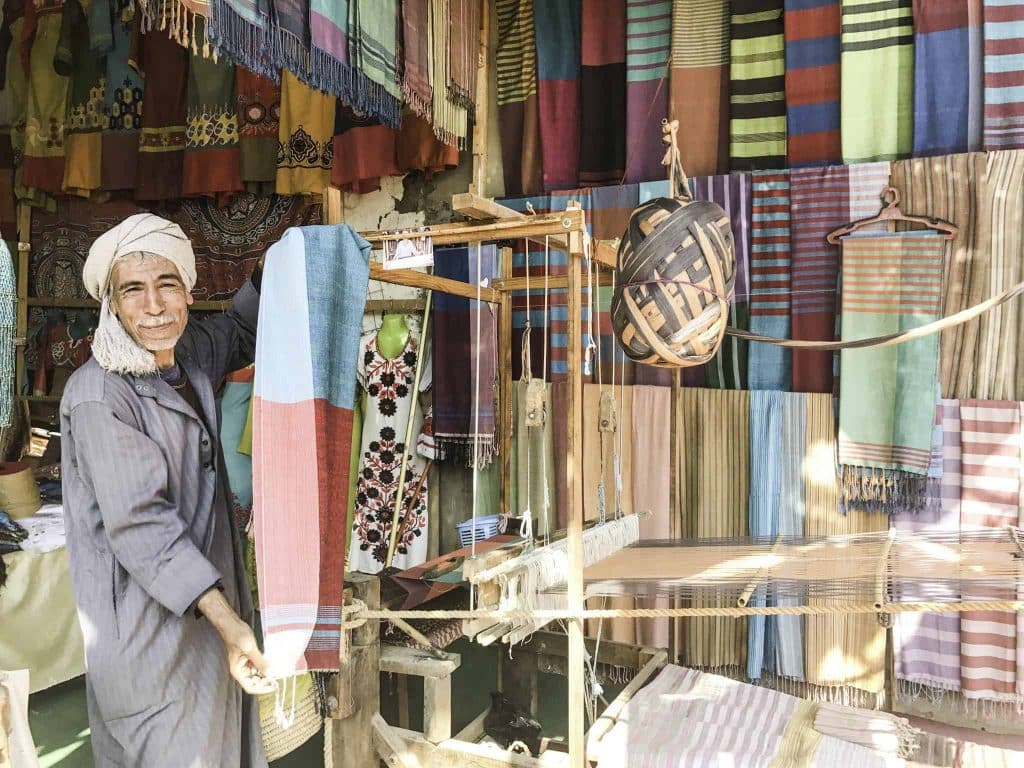 Part of why I wanted to do a DIY Egypt tour rather than join a group tour is because I love having the chance to meet and interact with locals. I was worried that by doing a Nile cruise, I would lose this aspect of my trip. But I didn’t.

Firstly, my private guide had lots of local friends and contacts in places he went. So my stroll through the market ended up turning into actually learning how Egyptian cotton scarves and alabaster were made. Things that I probably wouldn’t have experienced exploring on my own.

I was also surprised to learn that many Nile cruises are also incredibly popular among Egyptians as well. I would estimate that more than 50% of our specific cruise was made up of local Egyptians, many of which were fun and easy to talk to. I ended up making friends with an Egyptian woman at dinner one night when she explained to me the different Egyptian dishes and how to eat them. It was exactly the kind of local interaction I had hoped for.

So is a Nile Cruise the best way to go? I truly think so. I did tons of research before deciding to go this route and, now that I have done it, I honestly can’t imagine doing it any other way. An Egyptian Nile cruise offers so much and, with so many Nile cruise options, it’s pretty easy to find one that will fit your budget. Our Egypt Nile cruise was the highlight of our Egyptian vacation and I highly recommend one to anyone visiting Egypt.

Considering doing a Nile Cruise? Check out these options 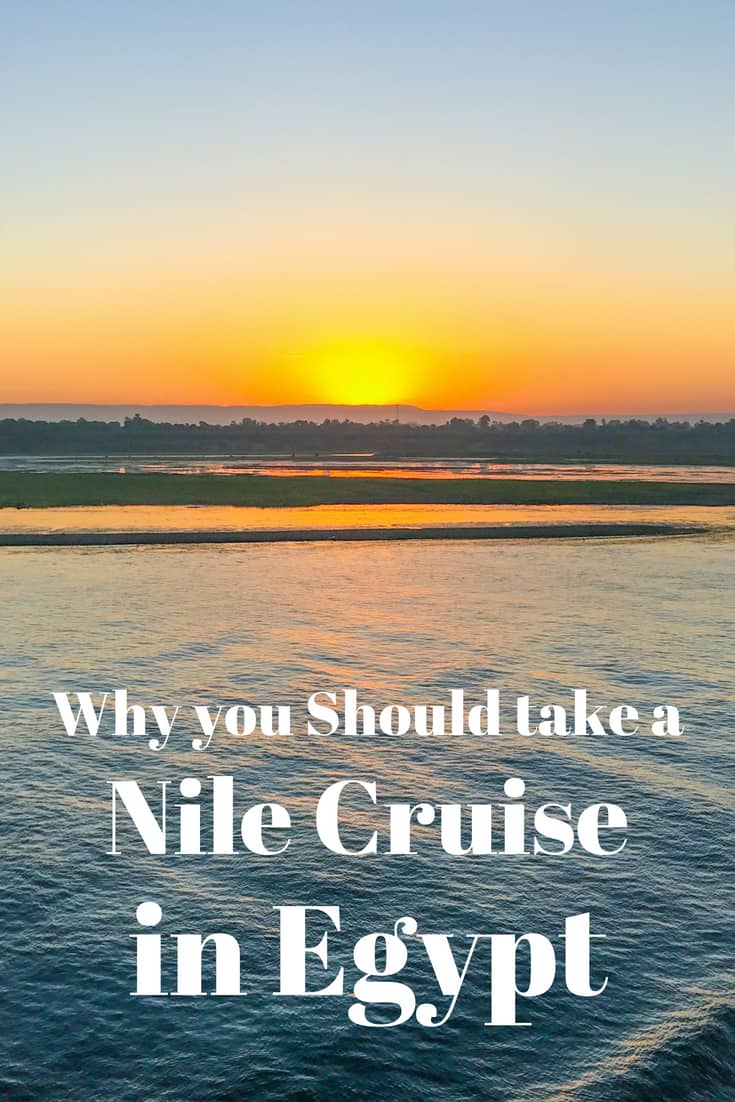 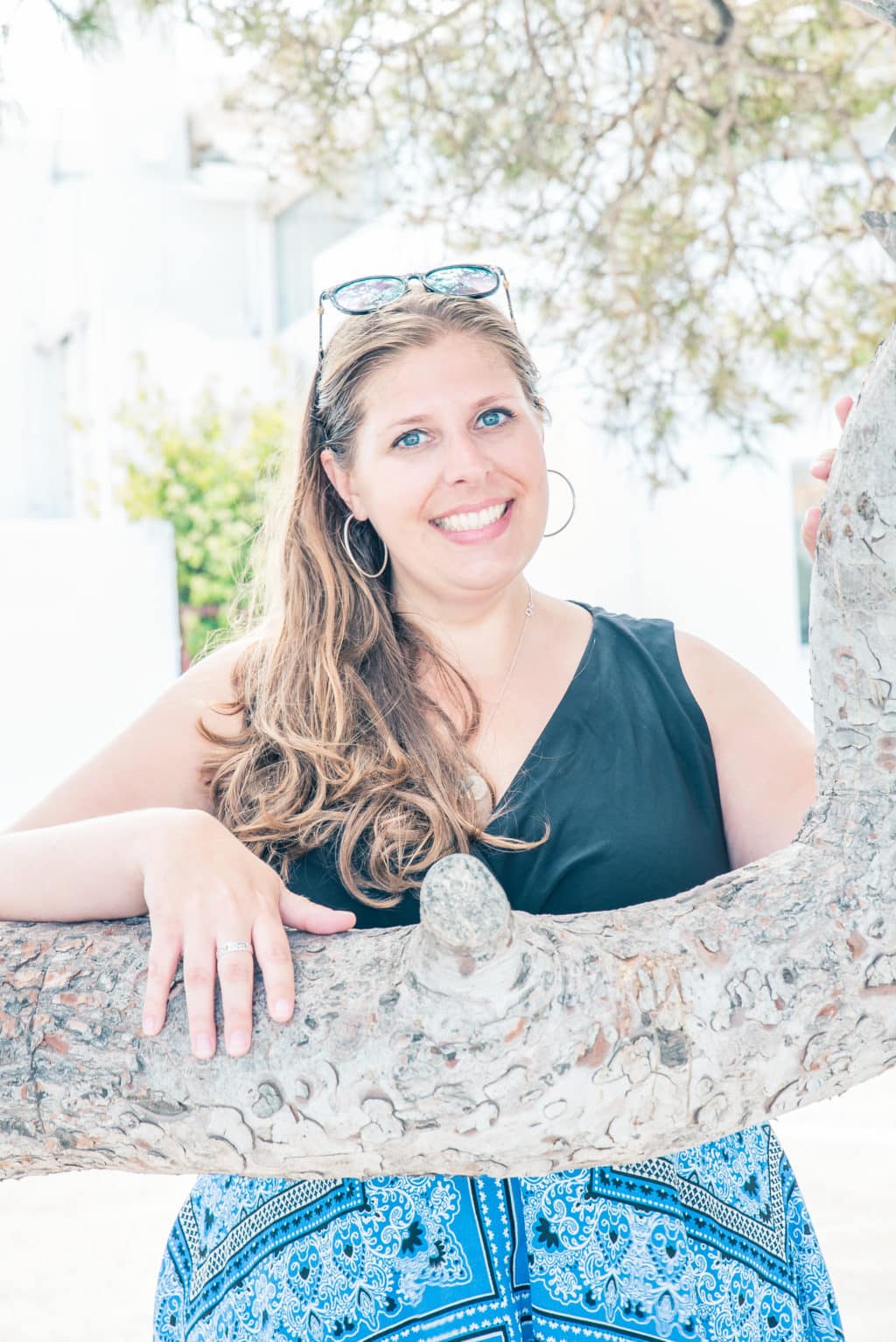 Now that it is officially fall I will embrace all

Must try wineries and cideries in PEC! (You’ll

How I make 💰 ⁣ ⁣ As I’ve been sharing my

It may be September but I’m still chasing summer

A family of black bears in the wild 🐻 ⁣ ⁣ W

Confession: despite travelling through 60 countrie